FAILING MY OWN MOTHER

I sat in the “nice” nursing home watching my 96 yr. old, 5 foot, 85 lb., shadow of my mother nod off during our conversation.

She was one of the cherished “private pay” residents. Only the accounting office, not the nursing staff or other residents, knew who was having hundreds of dollars a day automatically debited from their retirement savings; and who was having all their expenses paid by Medicaid.

But I knew. I knew they were taking the money she had earned as a first grade teacher and my deceased father had earned as a small town, municipal worker. It represented their combined 90 years of work. It was money they had saved by driving second hand cars, taking mostly day trip vacations and seldom choosing to dine out.

I advised my mother and dad how to save, when I should have advised them how to spend.

I encouraged financial safety, when I should have encouraged enjoyable living.

I am guilty of having failed my mother in a horrible and unforgivable way; one that she will never know, and I will never forget.

But I will not fail myself.

I aspire to end my life in voluntarily, strategically planned, and diminished circumstances…but with great memories.

I plan to be the guy in the nursing home who is broke, but has rich memories; rather than rich, but has broken dreams.

And if I die doing what I love, sailing on my boat, perhaps during a storm; I will be going out of this world the same way I came into it…screaming, wet, bloody, and…or course, broke.

You can build wealth. You need to protect your 401(k) from government redistribution to bail out underfunded municipal and union retirement programs. You deserve to spend or gift every dollar you’ve earned while still alive. You do deserve to…spend it all. 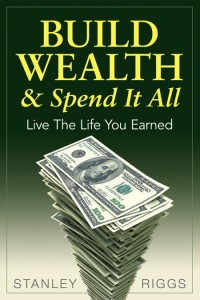